Taylor Swift is a master at connecting with her audience. Take a look at how she uses Photo Tweets to show her personal side. She shows off photos of her pets and promotes her sponsors. She keeps her fans engaged. They can’t wait to see what she’s doing next.

Here are a few ways musicians and authors can connect with their fans though social media.

Share photos of yourself behind the scenes getting ready.

Picture of yourself tweeting your audience or updating your Facebook page.

Are you nervous before a concert or book signing? Tell your audience how nervous you are through a Tweet or Fb update and mention how thankful you are they are there to support you on your journey.

Live stream often short streams to connect with your audience, do impromptu Q and A’s and surprise them.

Have someone capture a picture of you during a speaking engagement, signing autographs or simply speaking to a fan, sitting behind your desk dreaming up your next character.

The bottom line is you need to be consistently connecting and engaging with your fans. Growing your fan base. If you are a self-published author and dream of being successful or even published the traditional way you have to have an established  brand/platform. You need to be where your audience is. What is the age group of your fans? If they are tweens & teens you need to be on Instagram & Snapchat. If they are grown adults you need to be on Facebook. Twitter is also a vital place to be. 500 million tweets per day is nothing to sneeze about. 4.6 billion people click the like button every day on Facebook! This speaks volumes of where people are checking in, following their friends, family and favorite people. You have to be consistent in your marketing and you have to make it real. By making it real I’m referring to being authentic. It’s ok to share the latest concert information, when your new book or CD will be released but you need to reach beyond the basic information.

Here’s a look at some of the ways Taylor Swift shares with her audience on Facebook:

My all time favorite band in the world is Bon-Jovi. I’ve been a fan since I was 13. I know i’m really showing my age here but that’s ok. 🙂

Their fan base is massive. They have over 26 Million fans on Facebook.

“We’ve been blessed. We now have a multigenerational fan base that has crossed both language barriers and cultural differences.” ~ Bon Jovi

Five tips to help get you started.

First tip: If you are unsure of what to share take a look at the profiles of people succeeding in the same industry/niche as you.

Second tip: Engage, engage, engage. Send personalized welcome messages and thank yous. For example someone new follows you on Twitter. Make a 60 second video saying addressing them by name, thanking them for following you then invite them to listen to one of your songs. I know this sounds like a lot of work but here’s the deal it takes a lot of work to get to expand your audience and build your platform. Even if you greeted 5-10 people a week with a personalized message you’ll make a difference. You’ll stand out and they’ll remember you.

Third tip: If you want to be really technologically savvy. Use the Instagram app on your smart phone. Share a photo on Instagram, Facebook and Twitter all at the same time. If you really want to make a splash use Canva to make graphics that fit the proper dimensions for each platform. Photos added to your updates draw more people in. People love visual content.

Fourth Tip: Use the Hootsuite or Twitter app to keep tabs on your Twitter messages and engagement!

Fifth Tip: Live stream. Host your own shows, highlight new songs, play for the audience and interview other musicians. Share your recording process.

Sixth Tip: Don’t be afraid to try out new platforms.  New platforms give you a chance to start with a fresh audience without all the competition that some of the larger platforms bring to the table. MeWe, TikTok and Clubhouse are platforms to pay attention to. 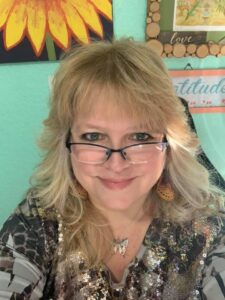 Thanks for visiting my website. I’m happy you stopped by.

Come on over and learn more about me and my services.

Carol Lawrence is an open-hearted, efficient and technologically savvy individual who will greatly enhance your social media experience. Her knowledge and ever-expanding virtual presence…