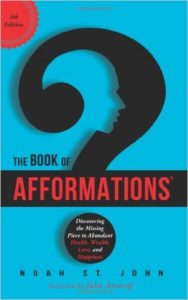 The Book of Afformations World Tour

My new friend, author Noah St. John, has just released his new book from Hay House, The Book of Afformations: Discovering The Missing Piece to Abundant Health, Wealth, Love, and Happiness and it’s an amazing read.

Noah tells the story of how he invented Afformations one morning in 1997. He was in the shower when he asked himself a question that changed his life: Why are we trying to change our lives saying statements we don’t believe when the human mind responds automatically to something even more powerful?

Here are just a few of the remarkable, real-life stories from people around the world who have used Noah’s Afformations Method to change their lives…

Noah St. John is famous for inventing AFFORMATIONS® and and creating high-impact, customized strategies for fast-growing companies and leading organizations around the world. His sought-after advice is known as the “secret sauce” for creating superstar performance in high-growth businesses.

Find out how business professionals have succeeded using afformations.

“Carol is absolutely the best! I love working with her, she makes everything easy and just…

I needed someone to help me resolve a Facebook issue and am delighted to have found Carol at Social Media Help 4 U. She…